Example of one of four walls to contain text with images, and drawings. 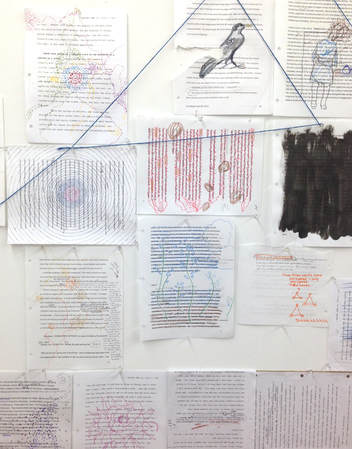 Example of wall detail.
I obsessively wrote and edited a contemporary novel from 2015 to 2017, and then, surrounded by its ephemera (that would be pounds of paper), I started thinking about the creative process of writing a book, and recreating that process as a visual experience.

As a writer, my ideas first appeared as images as if in a dream, still blurry. A focus arose; a few characters stepped forward. A structure emerged but then fell apart and a new structure emerged.  Certain characters became more interesting. Order seemed stable. But again, it fell apart. And so the process moved from clarity to confusion until finally there was something to read, and edit, and write yet again.

I saved old drafts and versions of the book, hand scratched notes, comments from readers, and drawings I used to visualize scenes, all the book’s detritus. Laid out on a grid and using text, scraps and notes, acrylic, ink, colored pencil, and strings, I visually reconstruct my process, drawing on printed pages, connecting parts of the story with string, and representing the movement from the subconscious to the conscious mind, from chaos to order. Designed to wallpaper a small room from floor to ceiling, the installation creates an immersive environment that includes a video and a table where I sit, day after day, for the length of the exhibit, and write with others who are welcomed into the space.

This show has not yet been exhibited.